This blog is new, to read older Team Tsuga tales, please check out our Dog Log.

Magic, Honor, and Respect at the Top of the World 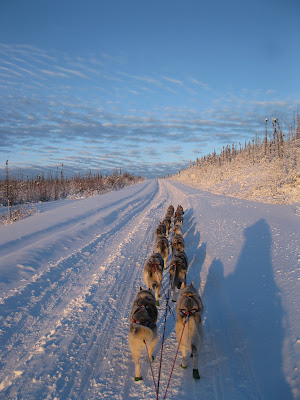 Mike and the core of the race team are just back from an incredible experience at the Top of the World 350's inaugural run from Tok to Eagle Village on the Yukon River and back. A true distance of over 360 miles through endless hills and some of the most remote country anywhere a road passes. From the moment I heard about this race, I knew we'd be making the trip for several reasons. It's fairly close to home, only 231 miles from our doorstep to race headquarters at the Tok Dog Mushers Hall. It goes through incredible country, some which I had not seen, but some I have on Quest and wanted to see again. Despite being a little early in the season for such a long distance and especially since this season I am trying to slow our peak performance for another month, I had my concerns as the race approached that we were not really ready, but the excellent format of the event gave me the freedom to feel if I just ran my team to what they were ready for, we'd do fine...

The race was put together in no small part to honor the life of Chief Issac Juneby of Eagle Village who was killed last summer in Anchorage after being struck by a car while he was in the city visiting his sister in hospital, on her death bed. It's a very sad story in so many ways, now compounded by the killer getting a plea deal and looking at only a few years in jail for the murder of the Chief's sister. Justice is still far off it seems for so many... Mr. Juneby's family were major contributors to the race and spoke at all of the race functions. A very big thanks to them for their efforts putting on the race, but also making it much more than just a race. The end result of all of this for us mushers was that there was some higher meaning and purpose to this trip. Before the race, each musher was given a bandana that we were told to tie on to our sleds and carry with us to Eagle Vilage and that would act as a kind of dream catcher for the spirits. I looked at that bandana tied on my stantion often during the trip, held it several times for strength, and proudly gave it back in Eagle Village, full of good feeling and spirits. The divide between Natives and whites in Alaska is sometimes too big to imagine and some seem to like it that way. There are large cultural differences and attitudes but also many bridges, ties, common ground. Mushing is a bridge. 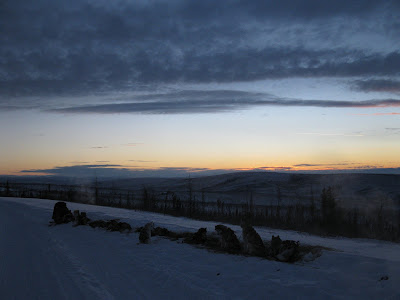 For myself, this was a special race becasue I decided to run all of the 12 Jim kids together, along with two of his grandkids. This meant my team consisted entirely of three consecutive litters our kennel produced, all of two of them and half of the third. Jim has been gone for just over a year, but he remains the spirit of our team and this kennel will never breed a litter that does not have Tsuga's Runaway Jim in the pedigree. He was that special, and always will be. This also meant I had a very veteran team that I know extremely well since I caught each and every one of them when they were born and have run with them for tens of thousands of miles. I know them better than I know myself and was ready to enjoy a good long trip with my best friends. I do have a few friends that don't have four legs, and some of them were also along for the trip. The field of mushers in this race had dwindled before the start due to all sorts of circumstances, but several folks made this a really special ride and I'd like to thank especially Paige and Cody, Abbie, Emily, and Jay for making some our camps extremely memorable. We didn't ever travel together, but we would talk about where we might stop next, and for how long, and then set off on our own saying, 'if all works out, we'll see ya there...'

Magic comes in many forms, and simply standing on the runners watching a team Sue and I have have created flow down the trail is pure magic for me. 12 brothers and sisters along with two of the next generation all working together as a team is nearly as good as life can be for this simple musher. Add the full moon, incredible scenery, great trail, good friends, campfires, and a higher purpose, and magic seemed to be everywhere you wanted to find it. My confidence in my training and myself was at a nearly all-time low going in to the race. Having just moved this summer, our training has been a bit off while we learn new trails. Weather had not been on our side either this season, and the team was considerably far behind our usual miles for the season. We are coming out of the darkest period of the year, and light had been hard to find for me for a while. I needed a bit of magic to help carry me along and it wasn't hard to find as leaders Wilson and Merlin ate up the early miles in the low, but bright sunlight as we climbed out of the -30 temperatures in the valley around Tok. 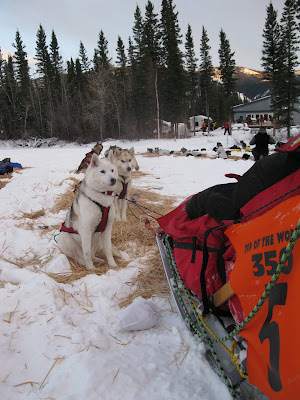 The format of the race was ideal for excellent dog care. Mandatory rest is often paraded out as the way to better dog care. I believe it leads to cutting corners, pushing dogs too hard between checkpoints, and not having time to make up for it. At this race, the only mandatory rest was 4 hours at Chicken on the return leg. Other than that, you could run the course as you wanted as long as you made the restart in Eagle Village at 2pm on the third day. Giving dog care along the trail is the best way to maintain a healthy, happy team. Streaking between checkpoints without stopping and pushing dogs to hurry up all the time causes stress and all the problems that come with it. Taking your time, stopping to deal with things in a timely fashion, and just being a relaxed musher makes a huge difference in a dog team's attitude and overall health. This race allowed that, and it showed. We rested more than we ran getting to Eagle Village, sharing campfires along the trail and moving again when we thought the dogs were ready. Good dogs.

Adeline Juneby Potts, sister to Chief Issac, spoke to us numerous times during the event. In Eagle Village, just before the restart, she had some words for us that will stay with me forever. She told us to "Respect the land, and the land will take care of you." Not in a 'you do this, I do that' sort of way, but in the true spirit of karma and good follows good. I believe in this, despite having been on a bit of a string of bad luck with my racing in our last few attempts. Hearing it from a respected and respectful elder of a completely different race and background from mine drove home a tie I felt to these people and their heritage on their land I am grateful to pass through. Respecting the land to me means, saying thank you for safe passage over the high mountains and their wind and past the icy overflows trying to push you off the trail. It means cleaning your campsite, picking up booties and trash, and leaving nothing behind but a bit of straw, dogpoop, and some ash in a firepit. I was extra careful on the trip out to not loose a candy wrapper and to pick up booties not even thrown by my dogs...

Respect was also shown throughout this race for various styles of mushing and mushers. Being that I was the only Siberian Husky team in the race, it was nice to feel respected by the majority of the mushers and race staff. When we first arrived in the north 6 years ago, we were not always greeted with such respect and I'm sure there is still talk behind my back from time to time. I've known several people to say very negative things towards my team simply because they are different and people have some pre-concieved notions. Heck, on my first Quest I was told flat out by a race judge during the race that she had a "prejudice against my team," despite not knowing me or my dogs. Mikhal Telpin was also at this race, A Native Siberian running his true Chukotka dogs, wearing their homemade harnesses, no booties, and thick coats and wide chests that make my dogs seem puny. Mikhal speaks nearly no English, but when he came to our campfires, he was welcomed and we tried some communication, which mostly led to shrugging shoulders and smiles, but little real understanding. One time when he came up behind us, I had finished my dog chores and had some extra hard-earned hot water, made from snow. I was done with what I needed for myself and my team. Mikhal had just pulled up and was starting his cooker. I walked back to his sled, showed him the water, and offered to pour it in his cooker. He smiled broadly and gratefully accepted the time-saving gift. He always had a nice smile for me the rest of the way and I was glad to pass on Respect. At the finishers banquet, Mikhal came to me, took my arm, looked me in the eyes, and simply said "Siberians!" with a big thumbs-up and smile. Thanks Mikhal, right back at ya, I guess we weren't the only Siberian team!

I could write for days about the dogs, the country, the people, and the journey, but I'll just add that we finished the race in tenth place. I had set midnight as the time I wanted to get to Eagle Village, at halfway, we got there at 11:50. I had set midnight also as when I thought we could get back to Tok with a good run, we got there at 11:45, after holding off most of the headlamps I'd been watching behind us for 50 miles. All 14 of my team finished the race strong and ready for more. My confidence was restored in my training, even with some pretty big changes this year. Most of all I found magic, honor, and respect wherever I looked and am grateful for an incredible journey through space and time with some of the best friends I'll ever know.

(check out our facebook page at 'Team Tsuga Siberians' for more pictures and many more at the Top of the World 350's facebook page. full results are also on the TOTW website.) 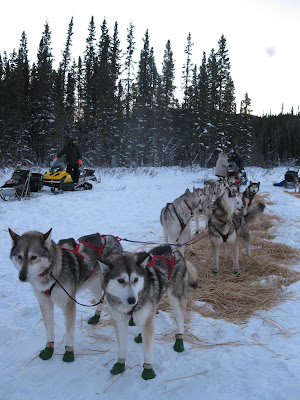 Team Tsuga
We live in Two Rivers, Alaska and train AKC Siberian Huskies for races and expeditions throughout the great Northland. We strive to drive a healthy, happy dog team that is well-trained and has fun. Our team has finished the 1000-mile Yukon Quest in 10 days, 20 hours, and 29 minutes, over a day faster than any other Siberian team has done 1000-miles! The more you do for your dogs, the more they'll do for you! Our team is proud to have won multiple awards for dog care- Sue - Vet's Choice 2010 Two Rivers 200 : Mike - Vet's Choice 2011 Yukon Quest, Vet's Choice 2009 GinGin200, Humanitarian Award 2009 Copper Basin 300, Vet's Choice Award 2008 Two Rivers 200, Vet's Choice Award 2007 Wilderness 100. RESPECT YOUR DOGS!!

Quest-proven sleds and much more-

Pick your favorite dog from our kennel!